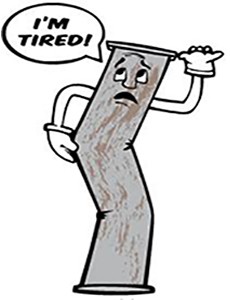 A “descendant” of an Irish mason, John Lally, Mr. Rusty Lally bears the last name of his inventor along with millions of others like him.

The Birth of the Lally Column

After immigrating to the United States from Galway, Ireland in the latter part of the 19th century, John Lally founded a successful construction company in Massachussets. Curious and imaginative, John found it easy to “spot flaws and deficiencies and then to devise means of improving the quality of work being done… Upset by the destruction and loss of life that so frequently accompanied a fire or building collapse, John searched for a method by which structures could be made sturdier and less flammable. A stronger support, he reasoned, would lessen the chances of a building settling, sagging, or even toppling, and a flame-proof support would virtually eliminate the sort of collapse that ensued when mere timber rotted, broke or was weakened by fire. The result was The Genuine Lally Column.” He was granted a patent on November 22, 1898. (Source: George E. Ryan , author: “Galway Inventor’s Brainchild Supports the World”, On Irish News, Sept 1984)

The lally column was born and has been used extensively in both commercial and residential construction since 1898. It is referred to by many names: steel column, pole column, concrete-filled posts, lally column, lolly column, etc. They are found mostly in lower levels, basements, and garages.

Clearly Mr. Rusty Lally and his friends have been around a long time. They have happily done their duty and contributed valiantly to the annals of construction history. Their service to mankind has been notable and the world has benefited from their existence. But technology advances and things change…and Rusty and his friends have gotten tired.

Time to Free the Lally Columns

An equally curious and imaginative engineer in Morristown, New Jersey, realized in the early years of the 21st century that homeowners had grown tired of their basements and garages being littered with lally columns like Rusty and he knew that technological advances in construction methods offered an alternative. He was convinced that it was time to liberate Rusty and his friends, and give homeowners back their space while improving the structural integrity of their homes. In 2008 Lallygone, LLC was born, with its sole purpose to “Liberate Your Space” and to finally allow Rusty and his friends to retire.

It’s been a long career, but Mr. Rusty Lally couldn’t be happier in retirement. Do you have friends who can join him? 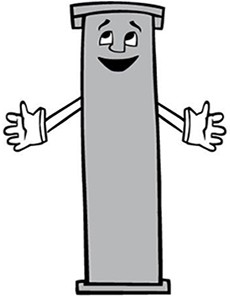 Perhaps you’ve heard of him? Listen to some of Rusty’s famous radio spots:

Lallygone offers estimates at various times throughout the week to accommodate your schedule. Use our online system now to schedule an estimate with our Structural Engineer at your location, or call us at 973-884-4466.

Concerned about the structural health of your home? Get your free checklist now to identify possible issues before they become major problems.

Our services include:    - Lally Column Removal    - Structural Reinforcements    - Bearing Wall Removal    - Structural Engineering Consulting    - Foundation Repair    - Floor Leveling    - Insect/Rot Damage Repair
Wish you could remove the support columns in your basement to allow for a pool table or media room? Tired of banging your car door on your garage lally column? Looking to remove those support posts from the center of your room? Call Lallygone today – we can remove any column in one day and for less than you think! Lallygone’s column removal services are currently available in the tri-state area of New Jersey, New York, Connecticut, and Eastern Pennsylvania.